Marine Energy Part 2– Is Hybrid Worth It? 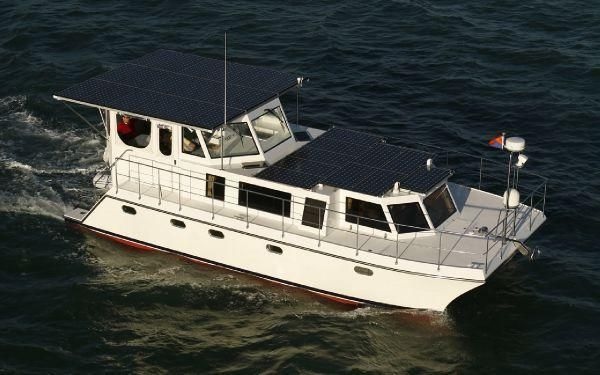 The best way of propelling any vehicle, on land or water, is using electricity. Electric motors are very efficient wasting very little energy as heat and they produce no emissions. In addition, an electric motor uses no energy while the vehicle is stationary whereas an internal combustion engine uses fuel just ticking over. Electric motors are smooth and quiet whereas internal combustion engines are noisy, smelly and vibratory. The electricity an electric motor uses can be generated using environmentally friendly methods such as wind or solar power.

So why aren’t all boats electrically powered? The answer is that you need to store the energy used on a boat, both for propulsion and for domestic use. For the two forms of propulsion discussed above, the two corresponding ways of storing energy are.

Best of Both Worlds

An increasingly common compromise is to us hybrid technology. Here both electric and internal combustion engines are fitted. A moderate sized battery pack can be used giving a relatively short range because the diesel engine is always available for longer distances. However, the bottom line is that if you are travelling away form a shore supply, for any period, most if not all of your energy will be coming from diesel. So why bother?

Well, hybrid technology is already in use. Hybrid cars are quite common on the roads these days, for instance the Toyota Prius. The advantage here is that the internal combustion engine can be turned off when stationary or moving slowly to save fuel. For road use, high powers are only required for acceleration so a smaller engine can be used with the electric motor providing extra power when required for acceleration.

Hybrid on the Water

But what about marine applications of hybrid technology and more specifically inland waterways. Plenty of hybrid boat drives already exist – here’s a few of them.