In this article, I shall look at the configurations of hybrid propulsion systems – their advantages and disadvantages and why I believe hybrid is the way to go for boats.

A hybrid system is quite likely to be more expensive than a simple diesel system since you have an electric motor and batteries as well as a diesel engine As discussed in the previous article, most of your energy requirements are still likely to come from diesel fuel so why bother? What benefits might we get out of a hybrid set up? Well, personally, I would choose the following criteria. 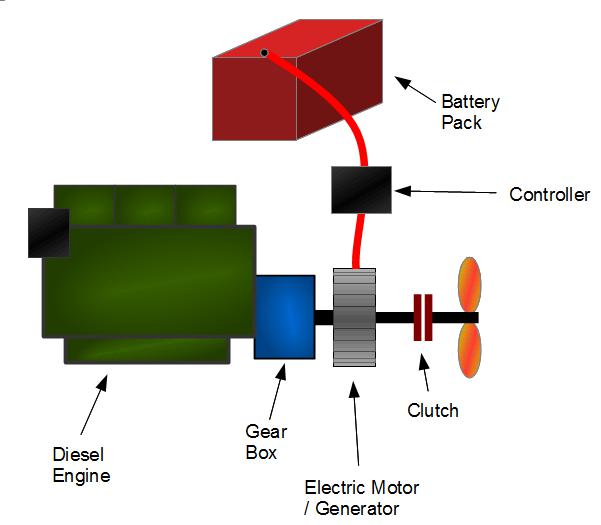 The basic parallel hybrid configuration is shown in the diagram. Here the propeller is driven by a conventional engine and gear box. The electric motor drives the output shaft of the gearbox in parallel to the main diesel engine. Electric drive is achieved by putting the gear box in neutral and stopping the diesel engine. The clutch on the propeller shaft allows the engine to be used to charge the battery while the boat is moored up. 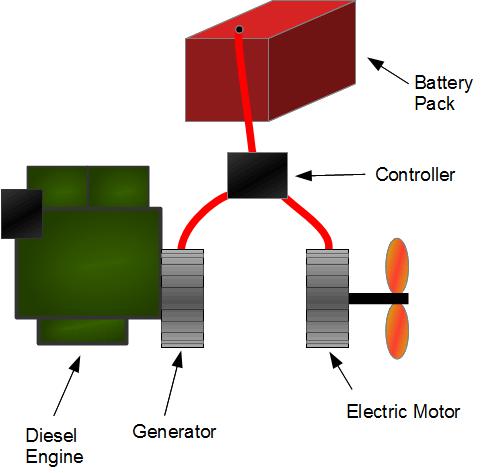 The basic serial hybrid configuration is shown in the diagram. Here, the engine drives a generator which charges batteries and drives propulsion motor. The system can be computer controlled so that the engine / generator system automatically provides power, only when required, whether this is for propulsion or domestic energy use.

Serial Versus Parallel Versus Conventional Diesel

Now we know what hybrids systems are capable of, how do the two hybrid systems, described above, compare with a conventional diesel set-up when measured against the criteria I outlined above.

OK I admit the following is subjective, simplistic and possibly a bit too “reality TV show”. Anyway I’ve assigned scores for each system for each criteria and totted them up at the end. If you disagree, feel free to contact me and make your point. The scores are all out of five.

Serial comes out ahead on nearly all counts especially for smoothness, automation and integration. As I shall consider in a later article, the cost need not be prohibitive either.

In the next article, I shall digress into a little mathematics and attempt to put some figures on how much energy our boat really needs.